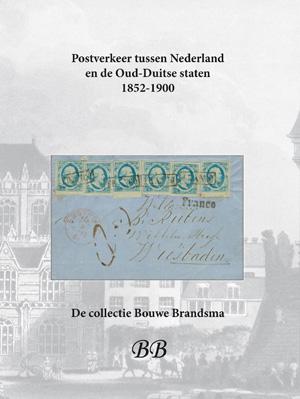 article number: 2
69.00 EUR
In this EDITION SPÉCIALE, one of the Netherlands’ leading collectors Bouwe Brandsma shows his collection of mail sent between the Netherlands and the Old German States.

Highlights from the Netherlands include the three-colour franking from Amsterdam to Berlin and a cover with six copies of the 1852 5 cents (Plate V) from Amsterdam to Wiesbaden. Some highlights of the German States are a cover from Nuremberg (Bavaria) to Amsterdam with 5 copies of the 1862 12 kreuzer with the open “mill wheel” cancellation No 356 and a cover from Rostock (Mecklenburg-Schwerin) to Amsterdam franked with a block of four and a block of eight of the 1856 ¼ Schilling and also a 5 schilling value.