Bouscher obtained his master's degree in international public law at the University of Amsterdam. In addition to his studies, he has worked for various non-profit organisations. Since 2015 he is a member of AIJP (Association Internationale des Journalistes Philatélique), the international association of philatelic authors and journalists. His first article appeared in the Dutch Filatelie magazine of June 2014.

With the appointment of Nathan Bouscher the board of Corinphila Veilingen is confident to have taken an important step forward in securing its position in the market and the long-term future of the company. 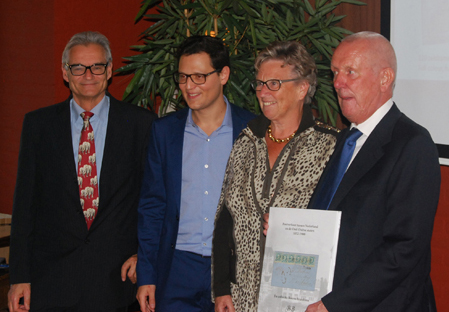 FLTR Gerard Garritsen, Nathan Bouscher, Gerda and Bouwe Brandsma at the presentation of the Special Edition book 'Postal exchanges between the Netherlands and the Old German States 1852-1900' at Postex 2014